It is easy to get confused between a Maheshwari and a Mangalgiri. But don’t worry, I’ve got this okay! As I said in the other ‘M’ post, the Maheshwaris and Mangalgiris are sarees that say little and want to add to your life story. And soon I will tell you how to differentiate one from the other. But first, why the Maheshwari is such sweet memory for me.

At one time, my mother-in-law loved them – the feel of that superfine cotton and for their ‘sober colours’ but she avoided wearing them. And quite adamantly so. ‘Why mummy?’ I would ask her. ‘I can’t wear a saree with a zari border to school’, she would say. I prefer something simple, she would add. She was the Principal of a school in Mumbai and after her retirement, headed a Continuing Education Unit in another school for the longest time. One day, while she was still a principal, she was trying to decide which saree to wear for an evening school function, in the sultry April heat of Mumbai. As a suggestion, I pushed one of my sarees forward – a pale blue Maheshwari with the usual gold border. Don’t have a picture to share here because this was so so long ago. She considered the ‘sober colour’, loved the feel of soft cotton and justifying the zari border as ‘acceptable’ because it was a function, decided to wear it. That evening, when she returned home, her opening sentence to me was ‘teri saree ab gayee’ / ‘your saree has now gone’. She would break into Hindi every once in a while when she was in a light mood. She basically meant that she had pretty much hijacked my saree. She gushed about how comfortable the saree was through-out the evening and how everyone had liked it. Ah!

That lovely feeling when a loss is actually a win!

She continued to like and wear the Maheshwari more often after that day. In fact, when we celebrated her 80th birthday, she wore a beige and gold, self-print Maheshwari which she had allowed me to buy for her. It went beautifully with the silver in her hair. And that’s the story of how a Maheshwari never allows its own beauty to overpower your story. 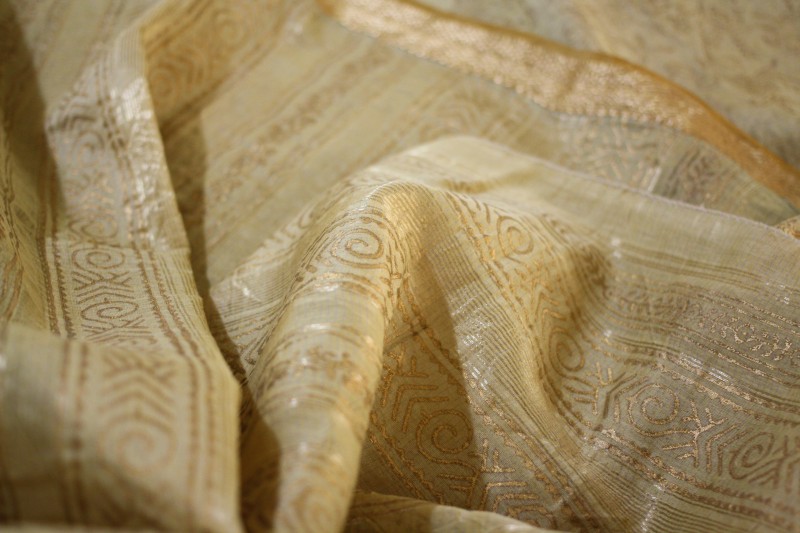 The Maheshwari saree started out as a pure cotton saree in pale colours with slightly contrasted colourful stripes along its borders and in the pallu. 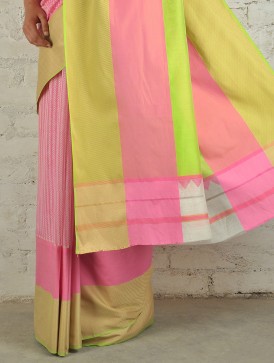 A simple cotton Maheshwari without the gold border. Picture courtesy and copyright www.jaypore.com

Another distinct Maheshwari style is the pure cotton body with a pale gold border which is distinct for its distinctive pattern of chevrons. Chevrons look like this: <<<<<<<< .

A typical chevron gold border in a Maheshwari

The other pattern that is found on a Maheshwari, but not so commonly is the brick patter or the ‘chatai’ / cane pattern. The pallu is a continuation of the body, intersected by thicker gold lines, and sometimes the entire pallu is made of gold in heavier sarees.

And here is how it looks! The classic chevron border again.

Now for the story of the origin of Maheshwari – as laced with gold as the saree. The acclaim of ‘inventing’ the Maheshwari saree belongs to Maharani Ahilyabai Holkar (1725 – 1795) of the Holkar dynasty of the Marathas that ruled over the Malwa region. She was a tough queen who ruled and protected her kingdom after the death of her husband and her father-in-law. She was also a great patron of the arts. In 1960, she commissioned the famed weavers of Surat to weave something worthy of her royal family. It is said that Ahilyabai herself attended to and contributed to the design of the first Maheshwari. They created the saree, with designs inspired by the patterns and motifs of the forts of Maheshwar. Thus was born the Maheshwari saree, which started out as a cotton saree, as I said earlier. Now it has a cotton warp and a weft made of Banaras silk – a stately cotton silk. With the customary gold border.

A cotton silk Maheshwari with a broader than usual border. See the chevrons? The self-lines are also an unmistakable Maheshwari characteristic.

This saree, like many other traditional sarees of that time, had to endure a trying journey of its own as it faced near extinction due to industrialization. Many weavers of the Maheshwari lost patronage in the 1970s and had to leave the weaving town in search for other, more lucrative professions. It was around that time, in the late seventies, where a direct descendant of the Holkar family decided to do something about this rich legacy and founded the Rewa Society – a name synonymous with the Maheshwari saree. This society works towards the revival of the art and also the weavers of this art.

The Maheshwari, since then, represents the elegant, the simple, the tasteful, and classy. Today a Maheshwari saree is accessible through several e-commerce sites, weaver exhibits and large department stores known for selling authentic creations.

And the Royal red Maheshwari

Buy and wear a royal heritage….you get the drift right because I don’t really want to sound like an advertisement. See you soon with the a new alphabet of a new region!